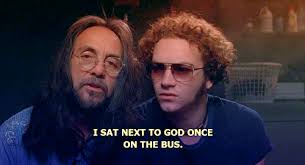 Eye was once asked by a student “does God talk to you?” eye responded with a smile “the question is not does God talk to us, the question is do you hear God when SHE is talking! ” God is all-ways speaking/talking to YOU. everything in creation is an ayat (sign) from God. we in the west are often times toooo captivated my the illusion of duality/bling to hear the voice of God in our every day lives. God is the eternal living ONE, Hu has the power of sight, hearing and speech. Eye would not worship a God that did not “talk” to me directly through my heart.

When the prophet Abraham was a young child, he went into the temple and smashed all of the idols/statues, leaving the tallest one standing. when the priest came and saw this, the priest asked him “Hu destroyed all of our gods?” Abraham told him “ask the tall statue?” the priest got angry and said “you know he cant talk.” Abraham replied “why would your worship something that can talk to you?” 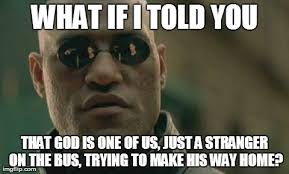 Eye recently heard the song “What if God was one of us” for the 1st time and the lyrics surprised me, because eye have seen God, and heard His voice on the bus several times! once on the way to Atlanta for a sufi circle there was a “drunk” man on the back of the bus HU was intoxicated with God. between his sleeping and waking he would talk with himself in the 3rd person about verses from the Bible and the Quran. at one point in his conversation Jesus was talking to Muhammad and the people on the bus where laughing saying this man must be real “drunk.”

What if God was one of us, just a stranger on the bus.