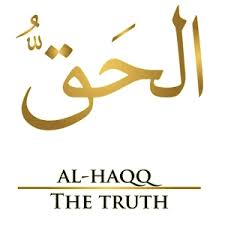 Truth is the philosophers stone that changes base medals(human qualities) into Gold(God’s qualities). Just as mercury is the base of many al-chemical-formulas, TRUTH is the foundation of all internal esoteric alchemy. Without truth, the seeker stands in the quick sand of illusion. Truth is often times underrated. Eager mystics seek difficult complex means for spiritual elevation. These means often result in a confused mass of ego and falsehood. The seeker thinks “eye have found the secret key to realization, my knowledge is above the other seekers.” This idea is a poison that goes against the nature of realization. In the Quran Allah says ” you did not argue until knowledge came to you.”

The seeker of Self Realization must stand In Truth. When the Light of God shines in the heart all falsehood will vanish in the blink of an eye. Truth is the foundation of the mystic path. All thoughts, words and actions of the seeker must be based in 100% Truth. It took over 20 years for eye to come to this realization. Without having your life based in 100% Truth, all of your prayers, fasting, mantra, zikr and study amount to nothing in the eye sight of God. On a deeper level without 100% Truth in the seekers life, some of the Higher powerful alchemical practices will be detrimental to the elevation of the practitioner. 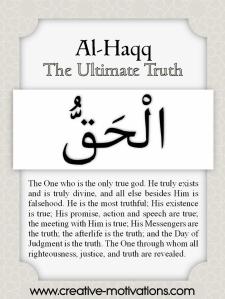 Breaking through the illusion

Deep inside of Truth one finds a Goldmine/mind

Un-wind the sleeping serpent at the base of the spine

Al Haqq (theTruth) is one of the 99 names of Allah. When the seeker affirms this attribute/name of TRUTH within their entire BEING it becomes the catalyst for the activation of the other 98 names of Allah on the plane of the soul of the seeker. When this name manifested IN me the cement wall of lies, arrogance, illusion, deceit and falsehood was shattered to oblivion. Internal Alchemy is based on Al Haqq !

Living in the Light of Truth !